It’s easier than ever to build a product and sell it around the United States, or the world. But if you want to do so without incurring the wrath of any particular state, or nation-state, you’d best have your tax matters in order. This is why Stripe’s news last week that it has built tax-focused tooling to help its customers manage their state bills mattered.

But for SaaS companies, things can be more complicated from a tax perspective. That’s what Anrok, a startup working to build sales tax software for SaaS firms, told TechCrunch.

The company’s CEO, Michelle Valentine, said that modern software companies need specialized help. And her startup is announcing a $4.3 million fundraise today to back its efforts. The capital event was led by Seqouia and Index, the latter firm a place where Valentine used to work.

Anrok delivers its service via an API, and charges based on the total dollar value of sales that it helps a customer manage. Its percentage-fee falls with volume, and you can’t pay more than 0.19% of managed revenue, so it’s pretty cheap regardless, given how strong software gross margins tend to be. 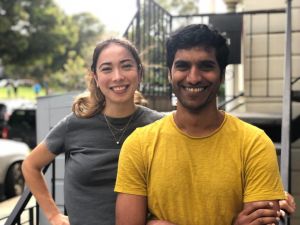 The Anrok founding team: Michelle Valentine, and Kannan Goundan. Via the company.

Valentine said that there are three things that make SaaS tax issues more complex than other products. The first deals with addresses. Software companies have to pay sales tax where customers are located, and often only have partial information. Anrok will help with that problem. The CEO also said that variable SaaS billing makes charging the right amount of tax an interesting issue, and that states have tax laws specifically aimed at the software market that must be navigated.

So, a more mass-market solution might not be the best fit for SaaS companies looking to avoid both trouble with states and the work of handling tax matters themselves.

It’s not hard to see why Anrok was able to raise capital. The company is early-stage with its first customers onboarded, so it’s not posting the sort of revenue growth that investors covet at the later stages. What then were its more fetching attributes? From our perspective, on-demand pricing and a simply gigantic market.

Sure, Anrok is serving SaaS businesses, but it’s doing so using what could be described as a post-SaaS business model; on-demand, or usage-based pricing is an increasingly popular way to charge for software products today, putting Anrok closer to the cutting edge in business-model terms. And the company’s market is essentially every software business out there. That’s a lot of TAM to carve into, something that investors love to see.