As so-called neobanks continue to gain more traction in the market with their more modern takes on banking and other financial services, a startup that’s building technology to help incumbent players better compete is announcing a big round of funding.

10x Future Technologies, a London-based fintech that helps larger, established banks build both next-generation services as well as tools to help their older services work more efficiently, has raised $187 million. We understand from sources close to the company that 10x’s valuation with this round is in the range of $700 million.

(The amount raised and valuation also roughly line up with the figures from Sky News, which reported earlier this month that 10x was raising new funding.)

10x will be using the funds both to expand into new geographies like North America, as well as to continue building more technology for its flagship platform. SuperCore, as that platform is called, is an all-in-one system built from scratch to run a wide range of banking services such as payments, core banking, mortgages, analytics, security and marketing, which 10x’s bank customers can integrate into their existing tech by way of APIs, or 10x can use to build those clients new services from the ground up. 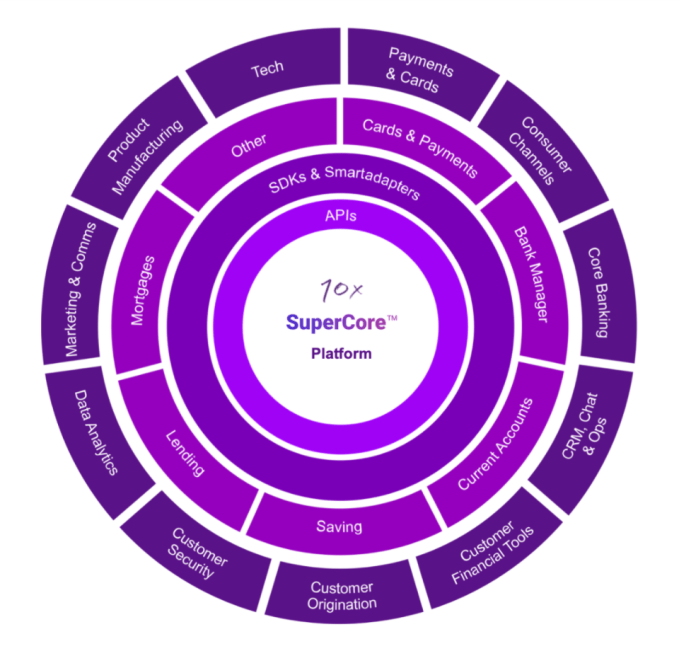 This Series C round is full of heavy hitters that speak to the credibility 10x has picked up in its five years in the market.

The latter four include strategic backers: Antony Jenkins, the founder and CEO of 10x who himself used to work at big banks (his last role was CEO of Barclays, and although he left under a cloud, his prominence and track record are likely reasons for the company’s clout), tells us that 10x is currently building services for Westpac and Nationwide.

10x has two other banks as customers that it is not disclosing yet, which will be leading to more soon, Jenkins added, since the industry is “at a transitional moment” right now. Some of 10x’s engagements are already live, with “volume going over the platform,” he said. Others have yet to launch.

The opportunity that 10x is targeting is big, but also elusive.

Neobanks and other new-generation fintech providers are slowly chipping away at incumbent banks’ stronghold on consumer and business banking. They are typically doing this not by becoming fully fledged banks themselves, but by stitching together suites of traditional and more modern banking services by way of APIs from other fintechs; machine learning algorithms to personalise services to customers; and modern interfaces to make the whole experience more user-friendly than what you might get from a traditional bank.

Which neobanks will rise or fall?

Incumbent banks want to compete against these new upstarts with rival products of their own, but in many cases they can’t: their infrastructure is too old, and oftentimes the company culture is even older.

This is where 10x comes in, providing the tools and advice to help them get new services up and running.

Jenkins notes that currently, a lot of the engagements 10x is seeing involve banks bolting on completely new services rather than building services to replace those they already offer. One fitting analogy here is that it’s a little like putting a modern extension on a very old house, rather than remodelling and modernizing the whole of the old house from the ground up.

But, it seems that we are now, five years into 10x’s life as a business, starting to see the first signs of banks willing to explore how to migrate their core data to more modern systems to make it more extensible and usable in a wider range of new services, and 10x believes it can be a partner in that back-end transformation, too.

“The legacy systems are where banks’ issues sit, because they are all architected around product, not customers,” he said. “But we believe that the industry is ready to contemplate the process of migration now.” The company is not yet working on any projects of this kind, he added, but it expects to in the next 12 months.

And even with other fintech startups, like FintechOS, also building services aimed at helping incumbent banks be more modern, that expectation spells opportunity for investors.

“We have been impressed with 10x’s strategy and ambition to play a key role at the heart of transformations taking place in financial services, driven by technology innovation, consumer expectations and regulatory reform,” said William Abecassis, BlackRock’s head of Innovation Capital, in a statement. “We are excited to be investing in the business as it scales into new markets.”

Leon Pedersen, MD and head of Thematic Investing, CPP Investments added: “10x is very well placed to change how big banks are built and deliver for their customers. 10x presents an attractive opportunity for a long-term investor like CPP Investments as we believe they will benefit from their exposure to the structural growth trend of financial institutions investing in digital initiatives and renewing core technology infrastructure, allowing banks to introduce new offerings and products much faster than using legacy platforms.”